The weekend's here and if you're worried about being bored, here are some great FPS games you can play on your Mac.

This time around I'm focusing on some of my favorite first person shooters (FPSs) that are currently available for the Mac platform, ranging in price from free to not free. Locked and loaded? Good. Here we go...

Every once in a while a sequel comes along that completely eclipses the original game. Such is the case with Borderlands 2, which took everything that was good about the original Borderlands and made it better.

For the uninitiated, Borderlands 2 drops you on the surface of a hostile alien world called Pandora. You're essentially a treasure hunter on a mission. You can choose from one of four different character classes, each with unique abilities, and in a nod to role playing games, you can develop special abilities by assigning skill points that you gain through experience. Borderlands 2 also features a weapons randomizing system that produces an almost unlimited number of variations on handguns, rifles, grenades and other weapons.

A hilarious script and great voice acting provides you with constant laughs through the 30+ hours of single-player fun your first time through (and you will replay this game to get experience with each character class). Add to that fantastic cooperative multiplayer gameplay and downloadable content to extend the game, and you've got a potent mix that will keep you coming back again and again.

Aspyr makes the game available through the Mac App Store and Steam (which we've linked above). Our recommendation is to go for the Steam version so you can get cross-platform multiplayer - Mac App Store downloaders are relegated to Mac-to-Mac play only through Game Center.

Few recent FPS's have had the impact of the BioShock series. The game struck gold for its detailed storyline involving Rapture, a Randian utopia far beneath the surface of the ocean, run amuck. A survival horror game, BioShock 2 puts you in the role of a Big Daddy - a genetically altered human encased in a heavily armored diving suit. Rapture is filled with psychotic and dangerous people who have been altered by a substance that can record their genes, granting them superhuman powers (and, unfortunately, driving them mad).

The game sports multiplayer action too, but unlike Borderlands 2 isn't available from Steam, so the Mac App Store is a safe bet. BioShock 2 is the sequel to the first BioShock, and if you haven't picked that one up, it's definitely worth your time as well, especially at $19.99 price. Both should wet your whistle until BioShock Infinite shows up for the Mac this summer.

Short of having its superlative sequel on the Mac, Call of Duty 4: Modern Warfare is the next best thing. Sure, it's been around for a while, but this game stands up to the test of time: it's a phenomenal FPS that puts you in the role of U.S. Marines and British SAS commandos as you travel to the U.K, the Middle East, Azerbaijan, Russia and Ukraine on the hunt for international terrorists who plan to detonate a nuclear warhead.

COD4: MW takes a break from past COD games by bringing the action to the modern era, instead of focusing on World War II, which means you have plenty of modern weapons to choose from. It also sports great multiplayer capabilities with plenty of challenges, unlockable perks at matchmaking to make sure you're paired with players of similar abilities.

A team-based multiplayer first person shooter available through Steam, Team Fortress 2 is almost six years old and still going strong. The game pits two opposing teams against each other in a variety of different modes: Capture the Flag, Control Point, Territorial Control, King of the Hill and more. The play maps vary from the ridiculous to the sublime, and you can choose from nine different player classes, some with offensive capabilities (like the Scout), some better on defense (like the Heavy), and some best for support (such as the Medic).

The game's fun to play not only for its varied gameplay modes and different character classes to master, but also for its cartoon-style art. And it used to be you had to pay for TF2, but Valve made it free to play in 2011. (The company makes money through in-app purchases players make to buy unique equipment and character outfits.)

The original Counter Strike took the world by storm when it was introduced as a mod for Valve Software's legendary game Half-Life. Valve reworked CS as its own independent game using the Source engine (hence the name). It's a team-based first person shooter that emphasizes accomplishing objectives - kill your opponents, rescue hostages and so on. What makes it a bit different than the rest is that when you're shot, you stay dead until the end of the round - no instant respawning.

Twelve years since its first release, Counter Strike still has a huge following and remains ridiculously popular. Last year Valve released Counter Strike: Global Offensive (seen above), so if you've gotten tired of the original, you can immerse yourself in a new game that features updated content from the original, along with new maps, characters and weapons.

Before Halo, before Myth, before Marathon, way back in 1993, Bungie Software made a name for itself with Mac gamers with one of the most innovative first person shooters we'd ever seen (and really, we hadn't seen a lot of them, but we knew this one was cool). That game was called Pathways Into Darkness.

Man Up Time has resurrected this 20-year-old masterpiece for modern Mac and they've made it absolutely free. Not 'freemium' - there are no in-app purchases you need to make to keep playing. Free. The game traps you in a mysterious pyramid in the Yucatan that threatens the very survival of the Earth. You must descend into its innermost recesses, battling fearsome monsters to save the world.

PID is a game of its era. Its graphics are quaint and primitive, its interface is awkward by modern standards, but it stands out as a period piece worthy of remembering and enjoying. It's a bit of Mac legend. And it's free, so you have nothing to lose but some download bandwidth.

Those are my favorite FPS games on the Mac right now, but if there are any other can't-miss shooters on your short list, let me know in the comments below. You can never have too much of an awesome thing!

We may earn a commission for purchases using our links. Learn more. 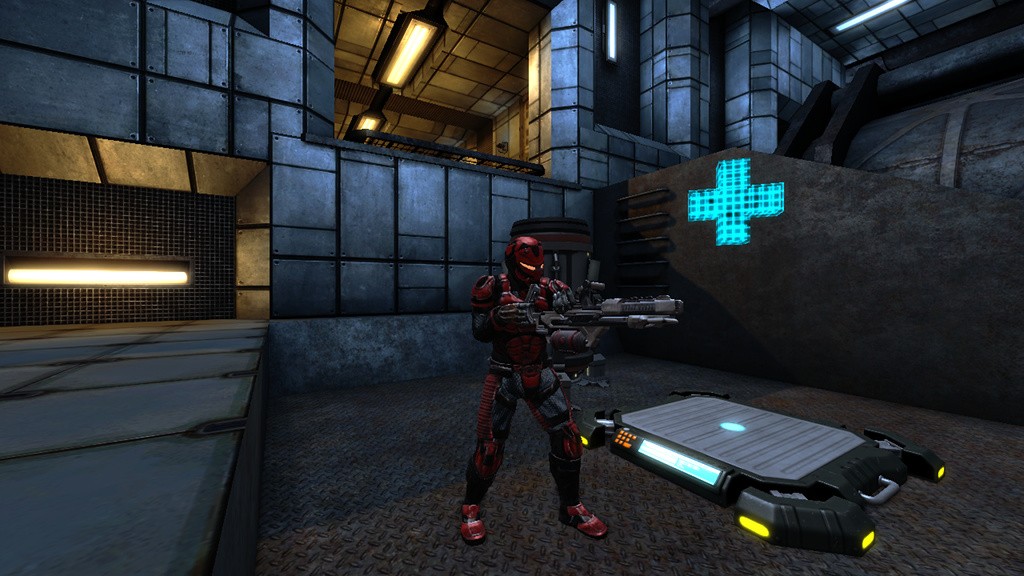 Apple has been forced to suspend all of its Today At Apple sessions throughout the U.S. and Canada because of the coronavirus pandemic.