By making GarageBand, iMovie, and the iWork apps free on iOS, Apple prevents customers from paying for apps that may soon no longer be updated for older devices, and the strategy on the Mac. As first spotted by Juli Clover of MacRumors, Apple has made the GarageBand and iMovie apps as well as the iWork suite available free for all users. In the last few years, since 2013, only people who bought a new iPhone, iPad, iPod touch or Mac device were allowed to download these apps at no additional charge.

Apple recently made a number of core consumer-level iOS and Mac apps free of charge to all users. Previously apps like iMovie and GarageBand were free only to customers purchasing a new Apple device.

Even users with old devices or those who purchased second hand iPhones or MacBooks can now download Pages, Numbers, Keynote, GarageBand, and iMovie free of charge.

Here’s how to get them and what you can use them for.

You can find Mac and iOS versions of the apps in the respective App Store. Simply open the App Store on your iOS device, or launch the Mac App Store. You can also find the links to the relevant desktop and mobile versions below.

Unfortunately, none of Apple’s professional suites like Final Cut Pro X ($299) or Logic Pro ($199) have been made available free of charge (yet).

iMovie is a surprisingly feature-rich free video editor that previously cost $14.99, at least for the more capable Mac version. It’s a video editor built with user friendliness in mind. It uses your Photos database as a source location for media.

The app tends to cop a bit of flak for Apple’s persistent meddling, as the company has a track record of doing things like removing the Save and Save As options from the File menu. But the app is great for newcomers, utilizing a simple drag and drop timeline and easy-to-manipulate controls for things like volume and video transitions.

One of the best things about iMovie is that it comes with a rich database of royalty-free sounds, customizable titles, animated backgrounds, and video transitions that are easy to work with. You can start a project on your iPhone and pick it up on your Mac too, while completed projects can be shared with the web and other users using Theatre mode.

iMovie supports projects up to 4K resolution and includes a range of export options including YouTube, Vimeo, or to file at a specified quality. It’s a long way off Final Cut Pro X, but it’s free and foolproof.

Did you know that Rihanna’s hit song Umbrella uses a free GarageBand loop? Slow down the included “Vintage Funk Kit 03” beat to around 90 BPM and you’ll see what we mean. Trent Reznor (Nine Inch Nails), Justice, Oasis, and many other artists have admitted to using the app to both capture ideas and create whole tracks.

Just like iMovie, GarageBand is built with user-friendliness in mind. You don’t need MIDI interfaces or a fancy soundcard to get started. You don’t even really need a background in music. If you just want to create randomized drum beats or play the rock organ with your keyboard then you can.

But you can also hook up a MIDI keyboard and get far more in-depth with the included instruments. If you invest in a good sound card you can record high quality audio using a microphone, or real-world instruments like guitars, synthesizers, drum machines and so on.

Finally, GarageBand provides access to Apple Loops, a database of royalty-free sounds to use in your own projects. Use these to practice playing guitar against recorded drum patterns, or find something you like and build upon it to create something truly original.

Apple’s answer to Microsoft Word, Pages toes the “user-friendly” line at the cost of features, but it’s still a great place to get some writing done. If the sight of Microsoft’s complicated interfaces bother you, you might just love Pages for its raw simplicity.

It’s still one of the best word processors on the Mac 5 Mac Word Processors To Help You Write That College PaperFinding sources to cite is easy. Planning a paper is easy. Sitting down and writing the thing? Much harder — do yourself a favour and get the right tool for the job. Read More and shouldn’t be missed at the low price of free. You can choose to create documents from scratch or use Apple’s bundled templates. You can even create your own documents and save them as custom templates How to Create Impressive Pages Documents and Templates on MacThe price isn’t the only reason to give Pages a spin — it's packed with ready-to-use templates that will make your work look fantastic. Read More on the Mac version.

Just like Google Docs, Pages utilizes real-time collaboration so you can work with others on the same document — whether you’re on iOS, Mac, or online at iCloud.com. Import images, format text document-wide, create charts and tables, and use LaTeX or MathML notation to display equations.

It’s not Excel or even Google Sheets, but there’s plenty you can get done using Apple Numbers How to Organize Your Life With Numbers for MacHere's how to use Numbers on macOS to plan meals, schedule work projects, or plan your budget using templates. Read More . The spreadsheet app shares many similarities with Pages in that it favors a simple interface at the cost of features. Currently Mac App Store reviewers are split down the middle: some love it and others hate it.

Whether Numbers is going to work for you depends on what you need a spreadsheet app for. If you’re creating a simple budget, plotting a graph, or in need of an impressive-looking 3D chart then Numbers can do it. It’s also a capable number-cruncher with over 250 in-built functions, including an auto-suggest functionality for formulas.

But it lacks the powerful capabilities of Microsoft Excel, and can’t match the online-friendliness of Google Sheets. This makes Numbers somewhat limited in scope for power users and data nerds, but it’s great for everyone else. 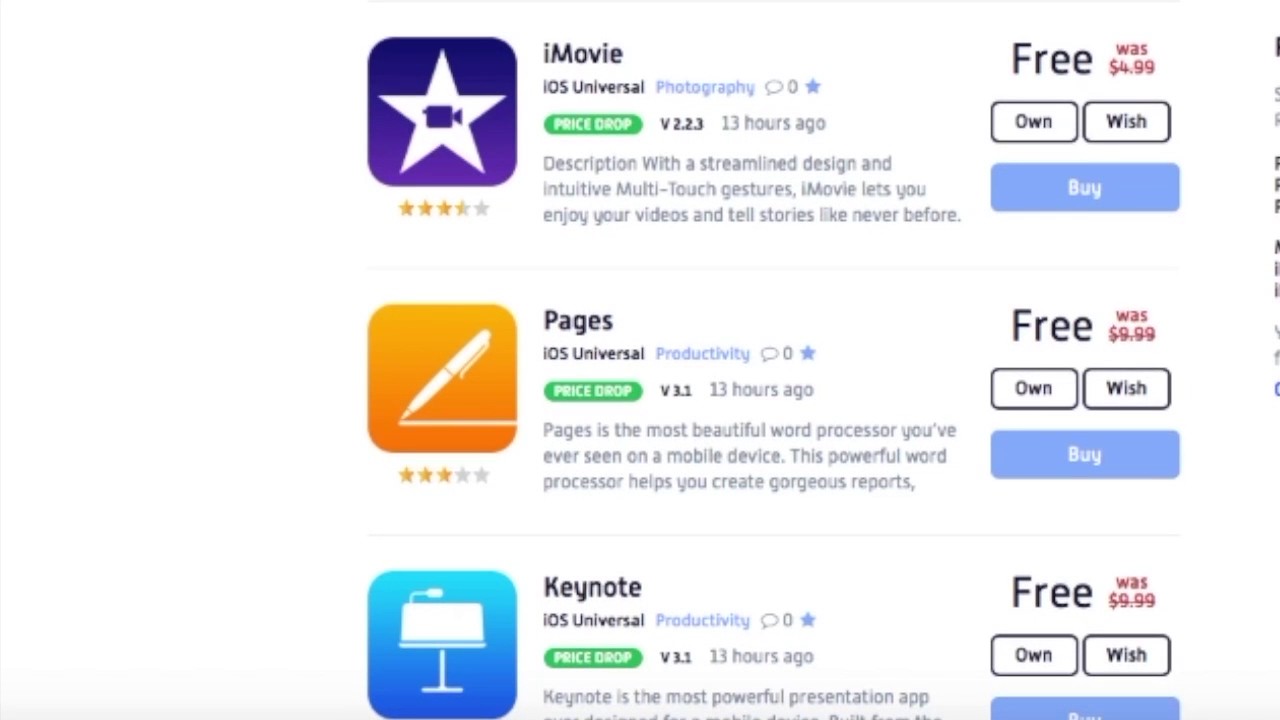 Finally, we have Apple’s answer to PowerPoint, the presentation app Keynote. Just like Pages and Numbers, it’s very Apple in its design: lots of templates, sharp visuals, and a simple UI. There’s not a lot to be said here. If you’ve ever created a presentation before then you’ll be right at home.

Built in AirPlay support makes it easy to display your presentations on an Apple TV, if you happen to have one. The iOS version has support for Keynote Remote which allows you to control your presentation using your iPhone (this works for both iOS and Mac).

If you don’t want to pay top dollar for Microsoft’s offering and you’re unimpressed with Google’s offering, Keynote is a solid choice for your next board meeting. You can even use iWork for iCloud to access and work on your presentations remotely.

There are two other creative Apple apps that have been available free of charge for a long time, the first being iBooks Author. As the name suggests, this is a comprehensive tool for creating interactive publications How To Write and Publish Your First iBook Using iBooks AuthorThinking about producing your own e-book? Apple's iBooks Author is a free, user-friendly tool for producing interactive publications that can reach a large audience of iPad, iPhone & Mac users. Read More which you can then make available using the iBooks Store. It’s a powerful tool, with one very specific and limited use.

The other big one is Xcode, Apple’s integrated development environment (IDE) for creating iOS and macOS apps. The app is free, and programming language Swift is now open source Apple's Swift Is Going Open Source: So What?Even if you aren't a programmer yourself, Apple's decision to open source Swift will impact you. Want to know why and how? Read More to boot. You can learn Swift for free The Best Places to Learn Swift, Apple's Programming LanguageIf you want to learn Swift, now is the time to dive in. The language has a bright future and the faster you learn it, the sooner you'll be able to reap the rewards. Read More but you’ll need to pay Apple’s annual $99 developer fee to publish on the App Store.

Which is your favorite Apple app? Will you be using iMovie, Pages, or one of the others now that these apps are free?

Apple on Tuesday made both the iOS and Mac versions of its popular iMovie, Numbers, Keynote, Pages, and GarageBand free of charge.

In the past, the apps have all been provided free to anyone who purchased a new iOS device or Mac computer in the past few years. Tuesday’s move opens up free downloads to all customers, regardless of when they purchased their device.

The apps can be downloaded via the links below: