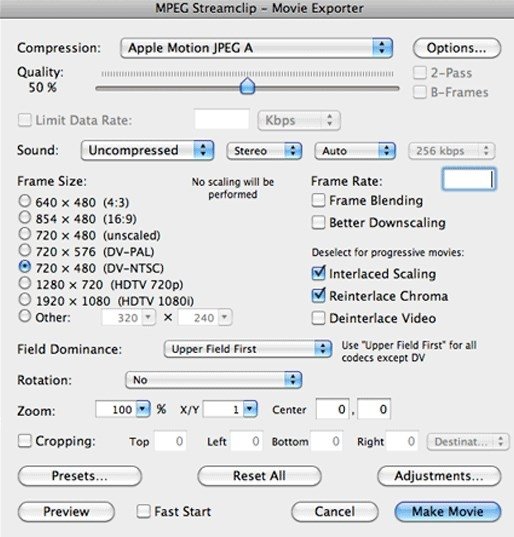 MPEG Streamclip is a free and simple to use video player and converter.

The video playing features of this application are good just for previewing the files that you would like to convert. Even though the producer refers to its product as to a video player and converter which supports the full-screen mode, MPEG Streamclip doesn't provide you a comfortable interface for video playing. If you are looking for a good video player, then you might try VLC, MPlayer OS X, or QuickTime plus FullScreen4Free.
The video converting capabilities are remarkable. I say this because of the functionality that this application provides and because of its freeware licensing. The program also provides an easy to use interface, even though some knowledge about video encoding is required if you would like to get the most from this application.
The supported formats for exporting are QuickTime (MOV), AVI, DV, MP4, or you can export frames from the input file.The application also provides many features that can help you achieve what you want from a video file. You can cut or copy portions of the video file, you can fix the timecode breaks, or you can simply trim the file. The application also supports a batch (conversion) list, so you can do mass video operations.
Pluses: it's free of charge, it can do various operations, it has advanced features, it has a batch list, it supports various input and output formats.
Drawbacks / flaws: is not very usable as a video player.
In conclusion: this application is one of the best options for Mac OS X when it comes to video converting.
version reviewed: 1.8