Part 1: How to play unprotected M4V files. M4V is an Apple format used to store TV episodes, movies and music video in iTunes stores. If you want to play M4V files that have no DRM protection in Windows (Windows 8), then Apple iTunes, QuickTime Player, VLC Media Player, etc. Will be the good choice.

Earlier in the week we discussed three of the best free M4V video converter in the world to convert DRM-free M4V to MP4 on PC and Mac while providing you the solution to convert DRM-ed M4V to MP4 for good. Here in this article we are going to focus on the recommendation of some top free media players for playing M4V videos or other media formats with high performance on both Windows and Mac OS for your reference. These top picks for the best free M4V media players introduced in the following review are chosen mainly based on the popularity, ease of use, supported media formats, performance, and so on.

Note: These best M4V media players we are talking about in this article are merely for playing DRM-free M4V video files instead of the DRM-protected ones from iTunes since the latter can only be played properly with iTunes itself or QuickTime rather than any other non-approved media players. If you have any need to play the DRM-ed iTunes M4V movies and TV shows on the common media players mentioned below, you can simply find the solution in the end of this article.

As one of the first 'play anything' media players in the world, VLC is a free, portable, open-source and cross-platform media player. It earned its reputation a long time ago for being fast and flexible, making the process painless, and packing just enough features. It is capable of playing just about any media format you can imagine, including M4V(DRM-free), MP4, AVI, WMV, etc. and even the Internet radio and other various streaming protocols. It features an assortment of customization options for quickly swapping viewing modes and tweaking the toolbar with additional controls. Besides, VLC also sports a number of optional third-party plugins to extend its features. Generally speaking, VLC Media Player is the best media player to go if you are looking for a program offering robust file compatibility, versatile playback and frequent stability updates.

When searching for the best video player for Windows, Daum PotPlayer could be the no.1 choice for it's lightweight, free, and capable of playing just about every file format, codec, media container, or type of file you throw its direction with ease, like VLC does but with more skins to customize the UI than VLC. In addition to broad format support, PotPlayer also gives you a wealth of features and controls to get your video playback looking just the way you like. What's more, it also packs filters for noise reduction, deinterlacing, brightness, contrast, hue, etc.

Another popular media player to Windows users is KMPlayer, which would be highly recommended if you are looking a great yet light alternative to the many unnecessarily feature-bloated media players available without skimping on quality features. Though it often runs slower that similarly-equipped programs on this top media player list, it's still worthwhile given its slick, jet-black UI and capable tools. Once set up properly, the gorgeous interface is a snap to navigate, providing a highly customizable media center for most audio and video formats. On top of KMPlayer, it's bundled with live URL broadcasting support and remains completely devoid of adds urging users to upgrade to the premium version of the service.

For both Windows and Mac users, DivX is a fully-formed, universal and refined media player with user-friendly controls and intuitive interface. The same as the other best video players in this review, DivX is able to handle most formats you throw at it — whether it be the software's native DIVX format or more-accessible options like MP4, M4V and AVI. It is stable in performing and produces excellent playback when watching video or listening audio, though its tool set is by no means overwhelming. Besides, it offers quick options for selecting the viewing sizes and burning media files to DVD discs, with additional options for streaming videos, music and photos to DLNA-compatible home devices such as your PS3 or Samsung Galaxy Note II, etc.

Solution to Play iTunes DRM M4V with Any Media Player

As we mentioned in the beginning, the iTunes movies and TV shows are protected with DRM and can only be recognised by iTunes and QuickTime. It's impossible for you to play the DRM-protected iTunes M4V files on any of the best video players listed here unless the DRM protection is stripped off. Now we'll provide you a simple way to get rid of the DRM from iTunes movies so that you can play the iTunes M4V videos on VLC, KMPlayer, PotPlayer and other common free media players.

The smart iTunes DRM removal tool is TunesKit DRM M4V Converter for Mac/Windows which is dedicated to converting DRM iTunes M4V videos to common MP4 with lossless quality preserved. It's also able to keep the original AC3 5.1 surround sound, subtitles, Closed Captions during the M4V to MP4 conversion. You are suggested to find more tutorial to convert DRM iTunes M4V to media players from this entrance: Tutorials of Converting iTunes M4V to Common Media Players >>

Nick Orin is a review writer, software geek and Mac OS enthusiast. He spends all his free time in searching useful software and gadgets to share with others.

Powerful and user-friendly as VLC is, chances are that some M4V format files in your video folder can't directly play using VLC. Different from the common video formats like MP4, MOV, AVI, FLV and WMV, you need to convert .M4V to the VLC supported formats. So today we are going to share the information about how you can play M4V files with VLC on your computer easily. 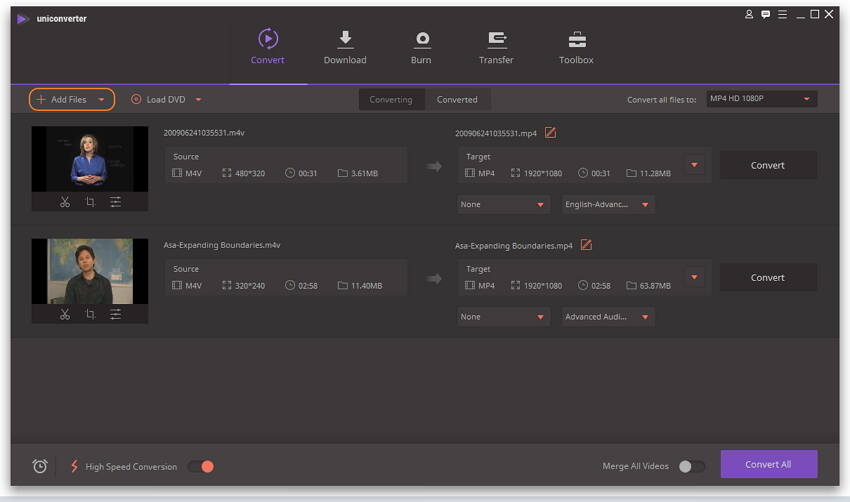 M4V file is a video format developed by Apple Corporation to encode their TV series, music videos on the iTunes store. This format is completely same as MPEG-4 video format and even video codec except for FairPlay DRM copy protection which is provided added by Apple, causing people can't fail to play these videos with VLC media player. To play these M4V format video files you need an authorized computer with iTunes and the same Apple account you used to purchase the M4V video.

Part 2. How to Play M4V Files with a VLC Media Player on Windows

Part 3. How to Play M4V Files with a VLC Media Player on Mac

If you are considering playing the M4V files on your Mac via the VLC media player, then the corresponding solutions are just like what we provide for Windows users. You need to convert these files to other formats, such as from M4V to MP4 format, only then you'll be able to play M4V files in VLC media player on Mac. Another way is to sign in Apple account that you used to buy videos from iTunes store, then you can play these files on iTunes, but note that this doesn't play with VLC.

Part 5. How to Convert M4V for Play in VLC Media Player

Wondershare UniConverter (originally Wondershare Video Converter Ultimate) is such a wonderful software and enables you to convert M4V for playing in VLC media player. It's so amazing that allows you to convert M4V videos to MP4 or other 150+ formats in a few clicks only. This software also acts as a video converter, DVD burner, downloader and video streamers. It is such a comprehensive video solution that you can't miss the following key features.

How to Convert M4V Video and Play in VLC Media Player

First of all, install the program via the download button below and launch it. You can choose either Windows or Mac version. Both of them have very similar interface and functions, so you can follow the steps below without worries.

After launching program ,you'll under the Convert section > Converting tab by default. Add files here from your local computer either by drag and drop file or click on Add Files button on the interface. One pop-up window will open, you just need to select the M4V files you want to convert and click on Open button afterwards.

Once your M4V videos are added to the program, you can choose your desired video format by clicking the drop-down icon beside Convert all files to: and select Video > MP4 option, also the detailed presets. There are over 1000 formats available for your selection.

Note: You can create your custom default output format as well by clicking on Create Custom button.

Finally, click on Convert All button to start the conversion process. You can find this button in the bottom right corner. After the conversion completes, you can find the converted files in the Converted tab, right-click on the video and select the Open File Location option to find the output folder.

M4V files can also be played smoothly on Android devices with some players. Move to Top 6 M4V Players for Android >> to learn more.