The role of the surface navy is to achieve control of the seas and oceans so that they may be used by cargo ships to resupply ground troops. If the shipping lanes were to close any battles fought on foreign lands would rapidly be lost, the troops lacking equipment and supplies. The submarine is the perfect weapon to do just that. A single sub can wreak havoc amongst a whole convoy, destroying thousands of tons of equipment before disappearing into the murky depths of the water.

In World War Two submarines were instrumental in America's victory over Japan, eliminating both supply convoys and warships in large numbers. The enemy aircraft carriers were large and tempting targets for the proficient sub commander. Destroying a combat vessel of that size would considerably aid the war effort.

After eluding the escort vessels the attacker need only wait patiently in the middle of the convoy for the perfect moment to attack. As surface vessels rely almost exclusively on sonar to detect submarines a good commander can hide among the sound generated by the convoy he is attacking with little fear of detection. After launching an attack and either damaging or destroying the carrier the sub must make its escape. All enemy ships in the area will be aware of the presence of the vessel and will be hunting it. Active sonar will be searching the water and depth charges will be dropped on any possible contacts. The commander, if at possible, must evade detection.

Silent Service 2 is an old dos game, published in 1990 by Microprose Software. Main genre of this old game is simulation. We gave this game stunning rating of 87 and you can download it for free right here.

More often than not the sub will have been detected by the enemy escort ships when it fired. The commander will use a zigzagging course, possibly using decoys as well, followed by long periods of silent drifting to break contact. He will then dive deep and move away from the battle area at a slow speed. 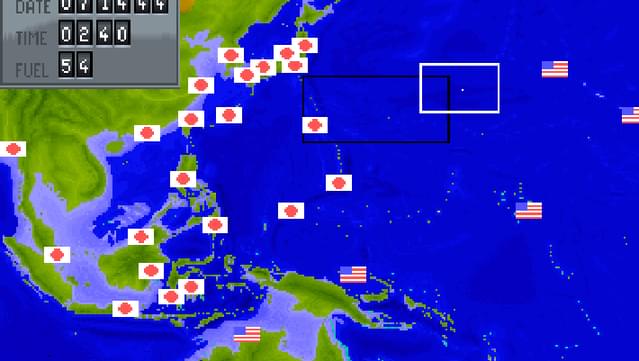 Silent Service 2 places you in the commander's seat of a hunter/killer submarine during World War Two. It is the sequel to the critically acclaimed Silent Service (never have guessed would you?) and is based closely on its predecessor. You have several different missions to choose from. They range from shooting practice against stationary targets, through single missions based on historical events, to a full military campaign in which you develop a career as a submarine commander. The more realistic you make each scenario the harder it will be. In real life a large proportion of the torpedoes fired didn't explode when they hit their targets.

The playing areas have been meticulously mapped and plotted. They have been expanded to include not only the North Atlantic but the South Pacific as well. Here you can take command of a German U-Boat and attempt to sink Allied shipping. During combat you have full control over the submarine and its crew. Using maps you can manoeuvre into attack positions. The periscope can be used to get a visual conformation of the target while the torpedo room prepares to fire. The engine room should be visited regularly as the gauges found there often show tell tale signs of wear and tear that may prove fatal during battle.

The best commanders were able to destroy thousands of tons of shipping without being detected. They would then re-engage the same convoy several hours, or even days, later and sink any remaining ships. These people became heroes, can you?

Microprose was a simulator specialist on Amiga, they made many of them. The Silent Service is a submarine simulator. Graphics not so developed, but the gameplay is good.

How to run this game on modern Windows PC?